DNA, Color Genetics and The Vikings

My DNA
It's kinda cool. Every once in a while I visit the ancestry dna website and it updates my DNA story. As they explain, it's not because my DNA has changed (of course) but because their information keeps getting updated with other people's DNA results, so they can give a more accurate picture of where my DNA ancestry originates from.

And if you're a conspiracy analyst like myself, then you know that 'the powers that be' now have my DNA if they wish to clone me. Perhaps there will be technology out there that can make me a newer body or clone when I'm really old. Who knows?

Originally when I did this a couple of years ago, my DNA story told me that 3-5% of my DNA came from Greece and/or Italy. That surprised me! I thought some hanky-panky must've gone on during one of the great World Wars and I was never told of any ancestors from that area. They have since removed that.

As you can tell from the picture below, I'm mostly Viking from different areas known to have the Viking influence. Given my red hair, blue eyes, freckles and pale skin, it was no surprise. I have the same coloring as my father. Any my father's mother's side is French Canadian, so that was no surprise either. None of it was a surprise but it's nice to look at it. 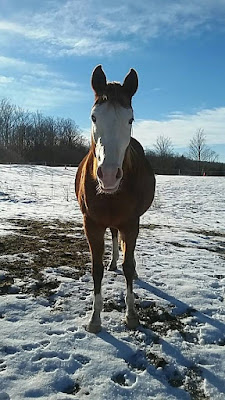 As you can tell from my mare's photo, she is due to foal this April. She is a sorrel overo (color coat ee, aa?, SW1), the same as her mother's. Her sire: Spooks Gotta Gun is a bay overo (color coat Ee, Aa, SW1, SW2). SW1 and SW2 mean splash white. EE or ee means extension or the red gene. I have the MC1R gene which means the red hair gene in humans.


Wimpy's Tinseltown
The sire of this foal is a red dun. His sire is a palomino and his dam is a red dun. So there are lots of duns and palominos in his bloodline. Which again is the red gene (ee). It would be great to have a foal of that color. Will I get one? That's the question.

The only way to tell of course is wait until April to find out what Cleo foaled out. I haven't had a foal since Cleo so I'm really excited to see what I get!