In the Myler's book, The Level Best for Your Horse, I quote them:

"Our belief that tongue relief is the key to achieving a relaxed horse has not changed. If anything, we believe in it more strongly today that we did 10 years ago." (Preface)
"The Myler's also say, a bit can only do two things: create evasion or relaxation." (p.2)
With regards to tongue pressure, the Myler's after 25 years of experience have found: "...applying pressure to the tongue creates more evasion than all others combined. Their conclusion: excessive tongue pressure is the source of most bit resistance, and the bits that caused the most tongue pressure are the broken bits, the single-jointed, and three-piece bits." (p.5) 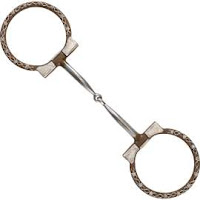 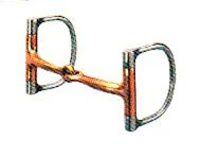 Like I mentioned in my last article on bitting levels, the 'kindly regarded' simple snaffle is one of the harshest bits because the joint is driven downward into the tongue causing so much tongue pressure. And yet it's the most widely over used & misunderstood bit in the equine world! "Sadly, some riders and horses have never known anything but evasion and resistance in their communication through the bit and fail to realize their are any other options." (p.3)


Why does Tongue Pressure Cause So Much Resistance or Evasion?
The tongue pressure of broken, single-jointed or three-piece bits inhibit the horse from swallowing. A 1,000 lb. horse produces 36 to 38 litres of saliva a day (mostly when eating). So they would rather draw their tongue back into their throat, blocking off their air, than not be able to swallow. And, according to the Mylers: "The tongue is the most overused and abused pressure point on the horse's head." (p.15). Also,
"The tongue is a muscle, attached to muscles in the horse's neck and consequently in his back. Inhibiting its ability to swallow impedes the performance of that entire group of muscles... Anything that interferes with your ability to swallow also interferes with your ability to move forward." (p.5)

And the Myler's answer to eliminating bit resistance or evasion: "go softer - offer the horse some tongue relief so he can work on the bit without interference and listen to your communication." (p.11)
They reiterate again by saying: "First and most importantly, excessive tongue pressure significantly interferes with the horse's ability to collect and balance himself under the rider." (p.9)

I was so impressed by what I read. It just made so much sense to me.I also watched Dale Myler's youtube videos which talked about the same thing. Here's the link.

I have incorporated this philosophy about tongue pressure and tongue relief 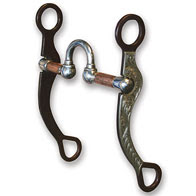 in my training. I have bought a few of their bits and I continue to do so.
Though the Myler's will tell you that riders and trainers train horses, I have found that a bit with more tongue relief does make a big difference.
In reining, a typical mouthpiece is the correctional. Because of the port, it does offer some tongue relief. It is still a great bit to use.
Putting my spin on tongue pressure and tongue relief.
Reinersue
@Copyright KISS Reiners