Many years ago - I'm talking back in the 90's, I was in search for a new reining coach. With there being no one locally that I wanted to go to, I began to look on the internet. Western trainers were starting to come out with VHS training tapes of their "secrets". I was intrigued.

I've bought tapes from people like Tim McQuay, Heroes and Friends Series with Bob Avila, Larry Trocha, Clinton Anderson, and Shawn Flarida. There are more. I watched whatever I could.

And this is what this column is all about - sharing those secrets and my experiences.

Discovering the Counter Canter
I was watching Bob Avila's exercises on counter cantering and I remember a really funny story that bears repeating here. He talked about a conversation he had with a little rider at one of his clinics. Bob was demonstrating his counter canter exercises when this little rider came up to him and said: "Excuse me Mr. Avila. Did you know that you're on the wrong lead." I couldn't help laughing with Bob's laughter and facial expressions as he recounted the story.

I had traditionally thought that way as well. It was revolutionary for me at the time to discover that trainers were doing it on purpose and it had so many good benefits.

Improve Loping - Adds greater degree of difficulty and therefore improves the horse's loping skills.  A must for reining and other riding disciplines.

Anticipation of Lead Change - a great refresher exercise to keep the horse honest through the middle of the figure 8 maneuver and elsewhere.

Strength and Balance of Your Horse - for maneuvers like Lead Changes and overall improved performance.

Improve Overall Flexibility and Suppleness - for both sides of the horse so one side is not stiffer than the other.

Keeps The Horse Attentive - to the rider and removes the horse 'thinking ahead' of the rider.


The Other Half - Improve Rider's Ability

Counter cantering really improved my riding skills tremendously.  It improved my accuracy of my lead changes and how to fix problems. I felt more confident. My horse was more balanced and we were able to do a great, difficult skill. 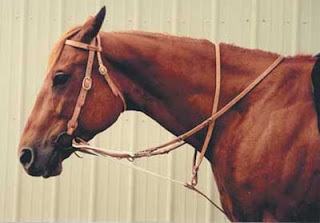 I would recommend using draw reins or a german martingale when doing the exercise. It helps the rider to concentrate on getting the horse to counter canter easily and not having to work on the face at the same time. Makes this easier for everyone.

My Counter-Canter Funny:
Sometime after I had become proficient at the counter canter, I was observing what riders were doing for warm up at a reining show. One of the first coaches I ever had started talking about their warm up program and I was interested in hearing how it had changed since I was their student.
I joined the conversation and mentioned about doing figure 8s and loping on the wrong lead for the 2nd loop or circle. The former coach jumped in to insult me and said: "oh because you don't know you're on the wrong lead." and I said "no", I wanted to counter canter. I was elated to see the look of surprise and bewilderment on the former coach's face. My decision to move on was a good thing.