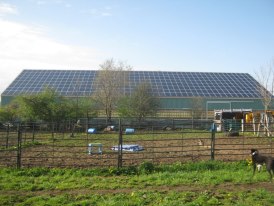 I was doing some work outside my home recently when an unfamiliar van pulled up to my house. It was not unexpected as I often get people stopping who need directions. I live on a corner. I had never seen these elderly people from town before. They looked like they were on a joy ride, touring the neighborhood. It was a cute scene. Made me smile. The gentlemen in the front, the ladies in the back. All eager to make their inquiries.

To my surprise, they wanted to know about the array of solar panels that I have which cover the whole south side of my indoor riding arena roof. 432 panels in all. Over 7,000 sq. ft. in area. They were in awe over the appearance. After all you don’t find this big of an application of solar panels in most places. To me, it’s been a long, slow process that’s finally come to fruition. Most people comment that it looks impressive. Me – I’m glad the process is over. Though I can admit that I am proud to have completed such a project.

They had asked me how I did it? I have repeated this story many times as it’s an interesting one. I begin by explaining that it has taken me 2.5 years to complete the project. Barry Finn and I decided that it would be an interesting story to repeat here for the readers especially for anyone who is interested in finding another use for their indoor arena. So here’s the story I told my visitors…

It all began when I was speaking to the engineer over the engineered drawings for the indoor riding arena. While discussing where I wanted the doors to go, in passing he asked me if I had considered putting solar panels on the roof. I had not heard of the Ontario Power Authority’s (OPAs) Feed In Tariff Program (or FIT). It’s a project to install solar panels and feed the electricity back to the grid. He explained briefly and I was interested. I did research on the OPA website (www.powerauthority.on.ca) and decided to look into it further. My friends were skeptical. Too good to be true perhaps?

The feasibility study had proved successful if I moved my arena back and away from the bank barn. It had been my dream to have the arena attached to the barn so I didn’t have to walk outside but this would interfere with the panels operation – the barn casting a shadow onto the panels. Oh well, now I have a big arena parking lot.

I decided to take the risk- try for a solar contract, and so the arena was designed and built to accommodate the solar panels. If you look up into the high arena ceiling today, it would appear like a dense wooded forest with long grey pvc pipes along the full length of the south arena ceiling feeding into the top of the viewing longe. The arena roof has a 6:12 pitch and is reinforced by wood bracing to hold the weight of the solar panels. A crane was brought in to place the 2-part trusses – the trusses being too big to be transported whole. Everything went well; mind you the south facing roof looked odd as it lay bare in preparation to hold the panels. I had a gigantic greenhouse tarp covering that side. It looked like a big ‘oops’ had happened in the construction. A red-neck neighbor asked me if I was growing pot. My friends are leery. Still other neighbors thought it looked queer. Rumors had gone around that I must not have paid the contractor and so they didn’t finish the job. What a laugh!

As luck would have it, I had a knock on my door one day out of the blue and was surprised to see Mark Dupuis of Fritz Construction (then with Peak Builders). We had known each other before- Mark had quoted on the arena. I was pleased to hear that his company was now in the solar business. I decided right then to work with Mark and Bill Clancy, president of Fritz Construction (www.thefritzgroup.ca).

The second order of business was to put a roof on the south side. The new, better type of solar panels would be attached to an existing roof. So at least my arena looked normal for 2 years until the solar panels were installed this past spring. All this time, I’m using the arena as usual.

A year had passed since I had started the solar project. Much work had to be done just to get to the point of submitting a formal application. I was ‘going for it’! My excitement was renewed when Mark and I drove to Toronto to submit my application for a solar contract. It won’t be long we thought. In hindsight, it was naïve to think any project involving 2 branches of government would take such a short time. I thought the process would take a year. My friends are wishing me luck – apparently I needed it. This is such a new government initiative. It takes time to work the kinks out.

I could go on and on and on and explain to you until it got monotonous, tedious and boring to explain each phase of the approval process and the amount of paperwork and other work Mark and I had to do to get my signed contract. You see, it’s not as easy as the micro-Fit or mini-solar projects. This size of project needed many levels of approval of the government and local hydro company because of the technical requirements. Each phase took it’s time and money.

Briefly, after the initial application, OPA gave me approval to proceed to get local hydro feasibility and approval. Engineers and electricians were called on site to do analysis and fill out many forms. Once that was done, I waited over a year to get final approval from the local hydro company. I would get excited, work would be done to get approvals, submit paperwork and money and then wait and wait. Then I would get approval to proceed to the next step. Again, the cycle would start. Mark managed the project for me as most involved highly specialized people in the solar industry. My background is computer not solar. I just kept the project moving along, signing paperwork and writing cheques. I want to add that at times it seemed to drag on. I’d loose my enthusiasm. It seemed at times like it would never happen. Know the feeling? I still don’t have my signed contract and it’s been 2 years. My friends and family are not sure from all the talk in the newspapers.

I won’t go into the financing part of the project except to say that the banks were all for it at first until there was an announcement that the provincial government may cancel the green initiative. Prices dropped on the MICRO-Fit. And then there was the election – the Tories wanted to kill everything. The banks are still not too eager to get involved. Fritz Construction is now working with the banks. So you can see that there were many ups and downs with this project as expected.

On Feb.21st of this year, 3 members of the local hydro company headed up by John Finlay and 3 of my group from Fritz and Chris, our electrician and my friend Lynda Mallinos heard that I had final approval to go ahead with the installation. Hydro One had approved. Great! Champagne was popped that day! I could finally see the end of it – about time! Mark couldn’t understand why my project took SO long. Mine had been one of the first and everyone was learning the process. My friends are relieved.

The official switch was thrown July 6th for the testing. (It was a good omen to me as that is my late husband’s birthday) So finally on July 24th, I had received my final notice from OPA congratulating me on completing the project!!! Concluding by saying that I had still more paperwork to fill out! I’m not surprised. My friends are now happy!

I can assure anyone reading this that this is not the normal length of time for a project like this. People getting involved now can benefit from Mark’s expertise. For anyone interested in seeing the arena solar project, Fritz Construction is planning an open house this fall. Please check my website www.reinersuehorsemanship.com for more details or contact Mark Dupuis at 226-230-1852.

The future is indeed looking bright!