He has his favorite riding buddy, a cute spaniel and his trusty GPS as companions. Driving all over North America to preach his word. You would think. But that’s not the case. He’s actually a very unassuming, confident man in his late 60s with a head full of grey hair and a passion. He’s quite a funny man if you get the honor to hang with him.

He’s been doing these lectures for 30 years. Going from barn to barn, greeting many eager people who have bitting problems with their horses. People often come to him when there is no one else to turn to.

My cell phone rings. I’m in the grocery store buying beverages and snacks for the event. “Hello Susan. This is Dale Myler.” He says in his southern, Missouri accent. He needed directions. He was in Michigan, on his way up from the Kentucky Rolex event and as you can expect, who knows where Durham is. People often have mistaken my town for Durham region.

“You won’t find me on your GPS” I say in a little embarrassment. There are 3 concession 2s in this area after the amalgamation. So after much sorting out, with main street Durham as his destination plugged into his GPS, I was left to continue my preparations.

To tell you about Dale while he’s driving here… in the early 1980s, Dale was riding and training horses, competing in rodeos and western riding events with his brother Ron. They both discovered the need for bits that would allow the horse to relax and focus on its work instead of resisting. They also wanted a better bit to lift shoulders and do better lateral work.

Because of Dale’s extensive research into equine dentistry and equine physiology, the Myler’s, including their brother Bob, have been able to design bits, in particular the mouthpiece, to accommodate the equine mouth making a much more humane bit. Now Dale shares his experience and knowledge at clinics and other equine events around the world including Sweden, Wales, Scotland, UK, Germany, Austria and Switzerland. In 2006, Dale was given the privilege of conducting a seminar at the Royal Mews at Buckingham Palace. 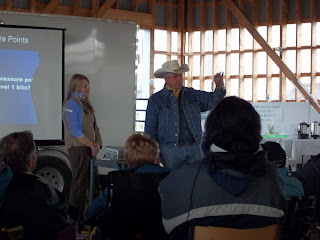 On Tuesday, May 1st in my arena, Dale Myler was scheduled to give his usual scientific researched based talk on the Myler Bitting System philosophy. It would be the first of a 10 stop tour that would take him to 2 other places in Ontario and into New England. He wouldn’t be home until May 19th.

“Would you please put it over on the grass and not beside the door?” I asked the Walton’s Sanitation delivery man. It was their suggestion to have the portable blue closet put in front of the arena door for convenience. I know I need the porta john but I think it’s better to have it discreetly over to the side - don’t you? It’s a private thing.


Dale arrived early. Much too early. Much to my chagrin as I wasn’t able to talk to my mentor very much as I had to complete the setup – coffee to make, snack trays to prepare, chairs to setup. I will plan better next time. Dale is a very down to earth sort of guy so he just amused himself. “What I like about him is that he’s a good ole boy. Not one of those pesky sales types trying to sell you a bit” comments Roy Ionson, owner of Ionson Saddlery.

Ellen from The Horse Habit arrived. My co-host. As the time approached 6pm and the starting time for the event, more and more people arrived with their chair in hand. One of the unique features of this event was that Dale did a bit evaluation of an english rider and a western rider after the presentation.

Events like this would not be possible without the help of our sponsors. Kristen, VP of Sales for Cavalier Equestrian Inc. had brought a group to help. They are the Canadian distributor of Myler bits and the big sponsor and organizer for the 3 Ontario stops. They are also my sponsor for Toklat’s Myler (Bit) Rider Team.

Though I’ve heard the presentation several times now including the humorous stories of his adventures, Dale always has different information to share depending on the audience. But it’s a hard sell to some. I’ve found that people in the horse industry as a whole really don’t like change. Dale must be used to it. I’m not. You will find skeptics everywhere. I don’t blame horse people. We’ve been told BS about bits (and other things) for a very long time. It was good to see the turn out. 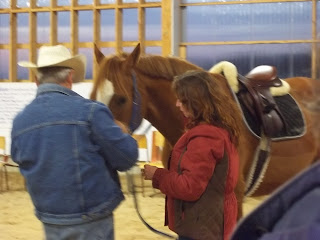 What you will hear most about this event was the huge change in the english horse after the evaluation. Jenn at the beginning of her evaluation expressed: “I’ve tried D-rings. I’ve tried French links. I’ve tried acupuncture, chiropractic work. I’ve tried Springer bits. I’ve tried every type of nose band. Nothing works. I can’t get the horse to stop flipping its head.” She wanted to show in hunter classes this year and was frustrated with her horse.

By this time of the night, it was dark outside and chilly in the arena, everyone watched in fascination as they saw an incredible difference when the horse rode around the arena calm, cool and collected. Jenn kept saying over and over how she was ‘blown away’ by the change.


Things finally got wrapped up after 10pm. Guests had filed out, away to their cars and home. Everything cleaned up quickly with the group from Cavalier and Ellen. Ellen and Kristen, happy with the results, had headed on their way home too so there was no one left expect Dale and I – just like it had started.

Dale, now as quietly and orderly as he had come in, had ushered his dog into the passenger seat of his truck, gave me words of wisdom to work on until next time and then waved good-bye as he pulled out the driveway and headed on his way. I could see how tied he was. Me too.

All was silent. I finally had time to relax after a hectic day. Walking slowly towards my house, my cell phone rings and I jump. “Hello Susan. This is Dale Myler again.” He wanted directions. This time he was headed to Lindsay, On. And so it starts again.

I want to thank my co-host Ellen of The Horse Habit, the group from Cavalier Equestrian Inc. for sponsoring the event and for Lynda Mallinos for taking all the photos. “Yes Kristen I agree. It was a huge success. Ellen and I would like to host another one when the opportunity comes up again.”

“I’ve told everyone who’s been in my store that they should’ve been there. That they missed quite a thing with Dale Myler” comments Roy.

Putting my spin on new bitting research and the need for change in the horse industry.
Reinersue
@KISS Reiners