I'm Flying for a Change! 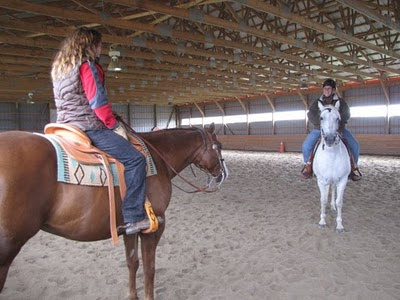 Meet & Greet @ Clinic Friday night
I had asked each student on the friday night of the clinic I gave recently on what goals they had, what issues they had, where they were at with their horse & what would they like to get out of the clinic. I like to customize a clinic for the students.

Hay Jude
One of the students named Judy told me of her goal of wanting to do flying lead changes. Judy is pictured here with her horse. So I had decided to talk about flying lead changes as the 2nd maneuver to get worked on so that we would have lots of time.

Judy's turn to work on lead changes was Sunday morning. The 10 riders of the clinic had quite a close bond happening by this time and everyone was cheering Judy on as she was learning to do the flying lead changes.
She told me that she knew of the mechanics on how to do it but had never done it. She slowly worked on the maneuver first by starting at the walk and then the jog.

You see Judy had broken her knee earlier this year and had not been able to ride for several months. She had specifically kept this year free from other activities so she could concentrate on her riding only to have her riding time cut short due to the breakage.
Judy had started back riding again, was keen, and was really excited to learn new things at the clinic.
> 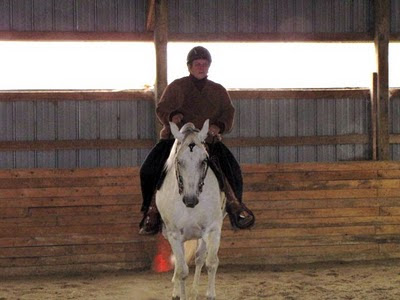 Awesome Lead Change
Judy had been practising her lead departures and her lead changes at the walk & jog and decided that it was time to try it while loping.
In anticipation, the crowd watched as Judy took a left lead departure and loped some left circles...
When she was ready and told everyone she was going to do it....
she came to centre,
asked for a lead change... and VOILA!!! She got it! And the crowd went wild!!!! YEA!!!

A big applause for Judy! I can still hear it. I can still see the big, big smile on Judy's face as she came to a stop and hugged her horse. She was SO thrilled. It was great!

I'm so proud of Judy! She braved it, tried her flying lead change and she did it!

Judy was still smiling when she gave me a big hug at lunch time. I was so happy for her.

Then and Now
Tonight I got an email from Judy saying: "Hi, Gotta tell ya. Did a reining pattern at a show today got my LEAD CHANGE. Yahoo! Jude"

I gotta tell ya... Life doesn't get any better than this!!