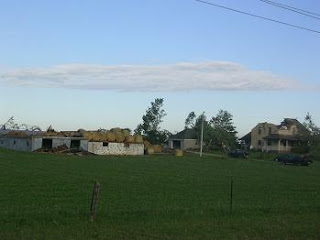 It's been a while since I've written. If you're like me, I've been busy working and busy with summer. I hope everyone has had time to enjoy the short, brief summer weather.
My hay is all in. Yes! Now time to pile wood.
Looks like fall is here. Today, anyway. It's cool.
I've been busy with customer's horses, buying a tractor, getting my place setup, working on adding a new building to my place... and of course.... starting to get ready for the coming winter. (It's my first year here. 4 months to be exact. You know how it is... Getting setup that first year.) Go. Go. Go.
Tornado Disaster in Durham - Stopped Dead in My-Our Tracks
I was finished up for the day. Horses enjoying a rest out on pasture. It started to rain and it took no time for the thunder to get really loud. Strange, I thought. Looked like a bad storm. I put the horses in and bedded them down for the storm. Ran extra water in a big pot for my house, just in case.
The sky went black at 4pm. The winds were incredibly strong! Being a small person, I could hardly stand. I was being blown away! Literally!
I lost hydro just then. Thank goodness I had put all the horses in! Out came the candles.
I stepped outside, looking south and could see black whirling clouds over Durham. It was eery. I had never seen such dark clouds. (I found out later of the tornado touch down.)
With a break in the storm a short time later, some clouds were coming from Durham from the southeast. Other clouds were coming overhead from the southwest. Both sets of clouds collided, not being able to decide which way to go. It was strange. I wondered if I were in the eye of the storm. Like a kid, I looked up in awe. Fascinated by Mother Nature's display of strength.
A customer & friend of mine Catherine Schafer, had gone into town to check her family and her home. Thankfully all was fine. She called and started to tell me of the damage throughout town....
Print shop... gone.
Activity centre.... gone.
Damage everywhere. No hydro for days the TV said.
You can see from the photo above of John Eckhart's farm that the tornado left millions of dollars in damage. My thoughts go out to those who were affected by the storm. Especially my customers, Calvin & Cindy Eghoetz of Durham. Their barn, house, pastures, & riding area were severely damaged.
Thank goodness everyone was safe!
The Calm After The Storm
All storms cleanse. There was such a quiet calm after the tornado. The rain had stopped. The thunder silent. Candles flickering. Everything at peace. The nothingness was a relief after all the noise and commotion. I just sat in my livingroom relaxing, knowing the storm had passed.
The lights from the candles gave the room a nice, peaceful glow. It was welcomed. I had time to think about how I was going to live and look after horses with the impact of the tornado.
Post Tornado
Live & Learn... the saying goes. I'm definitely getting a generator soon! I was without hydro for 7 hours but we were told that it could be days before we had hydro again. (That was the case for the people in town). With the prospect of no hydro for days, I phoned my friend Brad, a neighbour and farmer to see about hydro and water for the horses. They had a generator and we could get water from the creek if we needed to.
I also had no way of cooking or heating water except for starting a fire in my outdoor fire pit. BBQ anyone? Got to get one of those too! :)
I am going solar with my place but I'm not THERE yet. I will be working on it faster now too! :)
While checking out the damage in town the next morning, I was interviewed by Ann of the Globe & Mail. That was cool. I also spoke with a lady from town who remarked how it had reminded her of the ice storm. It sure did! We've had strange weather this year.
I just bought 60 solar lights. I'm not kidding...
Ride safe!
Reinersue
©Copyright KISS Reiners