I just got a new resale gelding the other day and was preparing to do my usual series of picture taking to include in my resale ads. I usually put up ads on equinenow.com, kijiji.com and facebook.

I also periodically put up photos on my facebook page: Foundation Reining Training Centre to show the progress of the horse's training. I've learned over the years that people like to see the updates to know that I mean what I say. So you can imagine that I'm constantly taking photos as I train. Training has come a long way.

I always get perspective clients asking for videos. It's not a new thing. I'm sure you'd seen them or done them.  I've never been able to do videos as I've not had someone available on a steady basis to video me training my horses – until now!

My solution: a robotic cameraman - the Soloshot2. You can find great information on their website. I got the recommendation from Spencer King Photography when Spencer was videoing the August ORHA reining show.

I wanted something to video me while I was riding as I didn't have to have another person around to do the videoing. It's easier and more convenient.
If you are not familiar with the concept, basically the Soloshot is mounted on a tripod with the video camera mounted on top of the Soloshot. The robotic cameraman is synced up to a device  (called a 'tag') on my wrist while I'm riding. The robotic cameraman will follow the tag thus positioning the recording video camera to video the moving object - namely me and my horse. Brilliant idea!
I'm new to the whole videoing idea. I've been playing around with it on my smart phone. On the first day of working with my new resale horse - the 2 yr. old gelding, I decided to use the video feature of my phone instead of the usual picture taking. My idea is to practise taking short videos to aid in my understanding of the whole video making process.  I'd like to do a youtube channel with my videos.
The result is that I made a bunch of small videos of my 1st cross tying session, posted them to facebook and had a blast doing it. I even made a short video on how I use coconut oil to desentize horse's to the spraying sound while conditioning the horse's manes and tails. 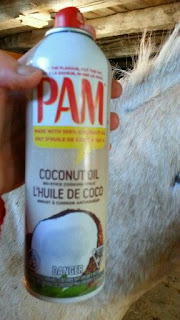 Desensitizing Video- spraying: new resale horse being sprayed with coconut oil for the day 1st time. All resale horses learn to like being sprayed. A part of their training program. Hope you enjoy.
Posted by Foundation Reining Training Centre on Monday, October 19, 2015


If a picture is worth a thousand words .....
then
how many words is a video worth?
I look forward to this new adventure in videoing horses.
Putting my spin on videoing!
Reinersue
@KISS reiners
﻿