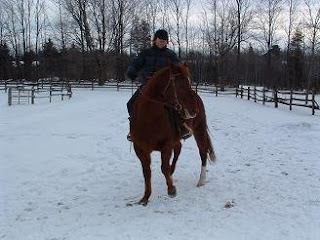 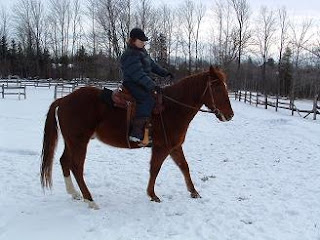 (Photo on left of Yield Hindqtrs to the right & then asking Trigger to backup. Followed by the photo on the right of Trigger starting to backup with less resistance.)

Backing Motion - Similiar to Forward Motion
I've mentioned in the Yield Hindqtrs exercises, the idea of teaching a horse to backup after the yielding of the hindqtrs as another advanced step. The reason for this is that the horse needs to be moving when we teach them to backup.
The backup.... after all.... is backward motion.
In one fluid motion, the horse can be asked to backup 1 step from the yield. It's easier for the horse to get the idea. Conversely, it is hard for them to backup or start backward motion when they are not already moving. The horse gets stuck.... there's that stuck problem again. We have to keep them moving. Backwards.... in this case.
If you watch horses in the pasture, they seldom move backward. It does happen but rarely. They are blind or cannot see right behind their butts, so they would prefer to go forward.

Not To Confuse With Forward Motion
As a trainer and rider, we don't want to confuse the horse with the idea of forward motion and backward motion. So if we are working on backward motion, I wouldn't recommend working on forward motion at the same time. It's just easier for the horse to keep the 2 things separate until the horse is familiar with both.
So the yielding or sidepassing is a great way to create motion to start your backup.
If you go back and read the yielding hindqtrs series of articles, just add the steps to ask your horse to backup BEFORE they stop. That's the trick. It's the secret to a hassle free backup.
Start with one step at first and then gradually build on your success until the horse is able to back several feet.
Of course this is started on the ground...... then mounted while yielding at a walk, and then progress to faster and faster speeds.
Eventually you can eliminate the yielding or sidepassing and just ask your horse to backup.
It's easy.
Good luck.
Question or comments are always welcome.
If you need help with the backup or any other articles, please contact me.
Reinersue
©Copyright KISS Reiners